In 2008, Alex Reimer was sailing down a mountain run when he caught an edge and fell, slamming his unprotected head into the icy hard snow. He woke the next morning gripped in a seizure. A friend called 9-1-1, the ambulance rushed him to hospital, and the doctors discovered a subdermal hematoma — bleeding near the brain.

When another friend flipped open Alex’s cellphone in the hospital, the first thing that popped up was a screen featuring a one of Alex’s favourite sayings: You Only Live Once.

Alex recovered from his injury with minor memory issues, but it didn’t slow him down—or damper his enthusiasm for life. 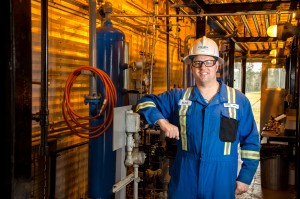 Seven years after the accident, Alex is still pushing himself to make the most of life—and doing his best to help others make the most of theirs. Earlier this year, he contributed to a universal playground accessible to all students. “Why shouldn’t all kids be able to enjoy playgrounds?” he says. “That’s the last thing you want, to take any fun away from any kid.”

Barely 30, Alex now juggles his own successful company, Eye on Electric, with family life and his role as one of the industry’s youngest electrical and instrumentation construction inspectors. While still in his 20s, he was lead contracting inspector for a $7-million compressor station — overseeing electrical and instrumentation installation at a plant worth $100-million while managing budgets, contractors, and ensuring the safety of a 60-person crew.

Alex’s management philosophy is simple: work hard while treating people fairly and they’ll do the same for you.

It’s something he learned early in his training at UFV.

“UFV instructors had such great teaching tools. They talked to you like an adult, they used humour, but they were also showing you what life was like in the real world,” he says. “There’s a real humanity to UFV professors, they worked hard even after class to help me understand the concepts.”

Today, Alex is the winner of the UFV Young Distinguished Alumni award for 2015. Amidst his busy work and family life, Alex still finds time to study up on the latest electrical and instrumentation innovations.

“If you’re not learning, you’re sitting still,” he says. “And you only live once.”