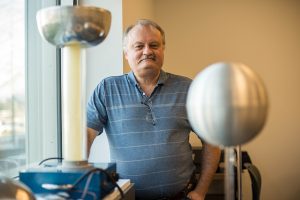 For Norm Taylor the inspiration for giving to UFV is all around him.

“Just look at them,” he says, gesturing to the students who have arrived early to do homework before the physics lab he is preparing for them officially starts. “We have so many smart, motivated students. How can you not want to help them?”

Norm, who works as a lab instructor at UFV, has been a steady presence in the Physics department for 24 years, joining in 1993 as UFV prepared to launch a Bachelor of Science degree.

And he’s been a donor to UFV for almost as long, first signing up for payroll deductions in 2001.

“My colleagues and I could see that there weren’t that many scholarships or awards for physics students, so we decided to work together to fund something.”

Thanks in no small part to the generosity of Norm and others like him, UFV now offers Physics Excellence annual scholarships to the best physics student in each of years one through four.

“We’ve had quite a few success stories come through UFV Physics,” says Norm. “I only know them at the beginning, because I only do first- and second-year labs, but I’ve watched them progress and admired their achievements after they graduate too.”

A significant number have gone on to master’s and doctoral level work in physics and successful careers.

“My former colleague, physics professor George McGuire, used to say that at least a third of the students in each of his classes were smarter than him, and I feel the same way. They have such potential, and I want to help them along their way.”

Norm benefited from post-secondary himself, starting out at Cariboo College (now Thompson Rivers U) before transferring to UBC because upper-level courses weren’t available at regional post-secondary institutions in those days.

He earned a Bachelor of Science with a major in physics as well as a BA in international economics.

In addition to his work as a lab instructor at UFV, he has served on the executive of the Faculty and Staff Association.