Even in the final days of his fight against cancer, the proud husband, father, friend, and social worker still wrote extensively in a journal, where words like ‘gratefulness’ and ‘hope’ kept arising despite his grim prognosis. He knew the doctors, nurses, and cleaning staff by name. All his life he was respectful – and respected. He genuinely appreciated everyone he met. He sought those who were alone.

He died three weeks after meeting his latest grandson, born in the hospital they shared and given the same middle name — Koe.

And now his name will live on in another important way, thanks to UFV’s recently established Roger Sasaki Memorial Endowment Leadership Award in Social Work. 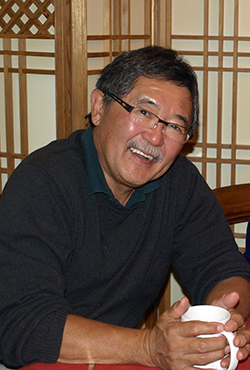 For Roger’s surviving family members, the award made perfect sense.

“At home he stressed the importance of education. Not just to get a job, but to increase the awareness of humanity, to learn about other people and ways of looking at the world around us,” says his widow, Sandi.

“This award gives students an opportunity they might not have otherwise. We hope they see his life as an example and inspiration.”

The Sasakis’ connection to UFV runs deep. Sandi enjoyed a 22-year career at UFV, serving as an instructor in the Office Careers and Applied Business Technology programs before joining faculty in the Computer Information Systems department. Their youngest daughter, Lindsay, worked five years as a coordinator with UFV’s Co-operative Education and Career Center. Lindsay’s husband, Jeffrey, teaches as a sessional in UFV’s School of Social Work after earning his BSW and MSW here. And Roger himself served on the program and advisory council that helped develop UFV’s BSW and MWS programs. He was president of the Fraser River branch of the British Columbia Association of Social Workers (BCASW), holding meetings at UFV while encouraging students to bridge the gap between the BCASW and academics.

“He was someone who recognized the importance of making a genuine personal connection with everyone that he met by making people feel what we all strive to achieve – appreciated as an individual, accepted as part of the community, and valued as a human being. This is the legacy that Roger left with us – and his memory will live on to support UFV Social Work students in continuing on with this message of compassion, empathy, and a commitment to help others.”

His award allows future social workers to continue the kind of work that Roger so firmly believed in. After earning his MSW from UBC, Roger began his professional career as a parole officer with Corrections Canada before moving on to the Ministry of Social Services and Housing, working with adolescents. He retired in 2007 after 20 years at the Forensic Psychiatric Hospital as a psychiatric social worker then department supervisor. During that time he was seconded for a year to work with Correctional Service Canada at Abbotsford’s Regional Health Center as project manager for the reintegration project.

During his 33-year career Roger worked passionately for his clients, always treating them with respect, unconditional service, and loyalty. He lived his entire life with equal commitments.

His family, including other children Kevin and Shaana, started thinking about the student award while writing Roger’s obituary for Vancouver’s daily newspapers. In the Japanese community, grieving families often receive a financial gift of condolence, called koden. The Sasakis didn’t want money for themselves, or flowers; they wanted a bursary or scholarship that would last three years. But once the idea was floated, donations came pouring in. The endowment was born.

More than $10,000 was raised, just shy of the minimum $12,500 required for an endowment. The Sasakis contributed the final amount required to establish the award. Its first installment will be available to the class of 2015 – thanks to immense support from across the country.

The Sasakis were contacted by people who hadn’t seen Roger for 40 years – colleagues, clients, friends.

“The word ‘mentor’ came up a lot. They’d say things like ‘you helped me and cared for me and I never forgot it’,” recalls Sandi with a smile.

“That’s the kind of person Roger was. He lived his life with care, compassion and respect for people.”

The source of donations was divided evenly between friends, family, and work associates. Their generosity allowed the Sasakis to grow Roger’s award into an annual gift of $500 for a UFV student registered in the Social Work program in good academic standing and demonstrating excellence in community service, student leadership, and volunteerism.

“We feel the award not only respects Roger in a personal way, but also speaks to his commitment to the profession itself. It’s designed to bring the community together to continue his belief in caring, compassion, and respect.”

Outside of work, Roger enjoyed traveling with Sandi, joining UFV study tours in China and Greece. After retiring, Roger picked up golf … big-time.

Sandi and Roger were regulars at UFV’s annual FSA tournament, and Roger would never turn down an invitation to join a foursome. Though living in Abbotsford, he chose a membership at Chilliwack’s Meadowlands Golf Club.

“He gave everyone a nickname. He liked being with regular people. He made friends everywhere.”

Whether enjoying a dinner party or coaching softball practice, he always sought people who were alone or separated from the group. After her father’s passing, childhood friends reached out to Lindsay, telling her how much it meant to them that he took the time to play catch or offer a little extra batting practice even though they were among the team’s weaker players.

“His life was so suitable for his field of work,” Lindsay says.

“It feels so right to remember him this way.”

Donations to the Roger Sasaki Memorial Endowment Leadership Award in Social Work can be made by visiting connect.ufv.ca/giving/donate.